ANN BY THE BED BY EMILY CARROLL 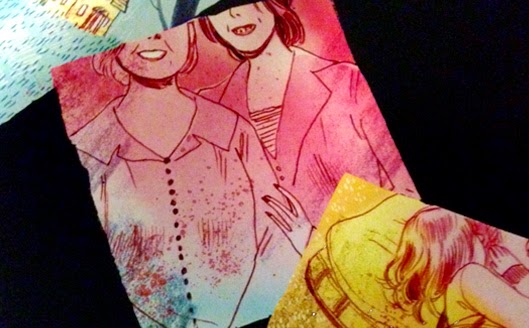 Kelly Sheehan and Daniel Elkin have a leaf through the pages of the new Emily Carroll comic, Ann By The Bed, discovering along the way a uniquely bone-chilling read. Carroll it seems has finally unlocked the door to making comics genuinely ...creepy.

Sheehan: Emily Carroll's Ann by the Bed arrived at my house on Saturday enclosed in a nifty envelope featuring a couple of illustrations from the book. At the time I was working on the script about Grant Morrison's Bible John, a comic which in some ways resembles Ann (albeit without Carroll's innate elegance). Spooky.

Spooky is a good word to use when talking about Ann by the Bed, or any of Carroll's work which I have seen to date. There is an uneasiness to the reading experience. Like English writer Robert Aickman, Carroll's work does not resemble a conventional horror story. Unique attention is paid to the creation of tension and mystery, resulting in an atmosphere all of its own. Often the result is as much fairy story as it is a tale of the supernatural. Aickman coined the term “strange stories” to describe his own work and perhaps Emily Carroll needs to think of her own niche, define her own particular style with an equally suitable term.

I've always had an issue with horror comics. The ones I've read try so hard to layer into that dark space of our reptilian brain which responds to fear, but they only succeed in being off-putting at best. I've never really been “scared” by them. Ann by the Bed (which, we should add, is what makes up the entirety of Youth in Decline's Frontier #6) was something else. Yeah, it spooked me. It genuinely unnerved me. It gave me both the willies and the heebie-jeebies.

Which surprised me. I had read Carroll's much-lauded and New York Times Bestselling collection of stories, Through the Woods, and, while I appreciated the artistry involved in her work and I was fascinated by her inventive story telling, I was never really overly anxious or afraid reading it. Ann by the Bed, though? This is some seriously spooky stuff here.

When I try to delineate what about this book makes it such an effective piece of horror though ... well that's where my skills as a critic start to stumble. Ann by the Bed doesn't pull any new narrative tricks compared to Through the Woods, nor does Carroll do anything all that different with her art here than before. So what is it, Sheehan? What makes Ann by the Bed the creepiest comic I've ever read?

Sheehan: I think part of what makes it work is the "urban myth" format which Carroll has framed the tale with. We've all heard them, and the fact that it is a tale about a friend of a friend's experience lends it a bit more credence. There is something about the story told first-hand which makes the hackles on the back of your neck rise. Last year my six year came home scared to death that “Bloody Mary” was coming to get him. Thanks a lot seven-year-old Ruben.

I hesitate to say I was horrified by Ann by the Bed. It was a much more “pleasant” experience than that. By contrast I have recently been reading Kathleen Jones' biography of Katherine Mansfield, The Story-teller. Part of the book's structure is that it looks at the life of Mansfield's husband, John Middelton Murray, after her death. It's an extremely disturbing read. Horrifying even.

Murray was involved in three subsequent marriages, at least two of them were disasters. In the first he could not see his young bride as an individual. To him she was Katherine reborn. Sexually naïve, he impregnated her three times in close succession with children she did not want. When she finally contracted tuberculosis, she was pleased because now he could at last love her as much as he loved Katherine (who also died of the disease). His next marriage was to a violent, abusive woman who was prone to rages in which she would assault Murray and his children and smash and destroy belongings and mementos.

Reading this makes you wince and recoil from the page. You don't want to push through because there is sure to be more unpleasantness to follow. Ann by the Bed, by contrast, leads us through chills and thrills and we are willing to go where Carroll leads us. It's fun. Well, until the end. The final parts, the bit that deals with a teen slumber party, (and the bullying and social isolation that can take place in such an environment), and the following two-page sequence which shows Ann and the unwanted attentions of her bother-in-law, are amongst the most affecting in the book. They are the most of "our world". The stuff that is closest in tone to John Middleton Murray's real-life horror show. 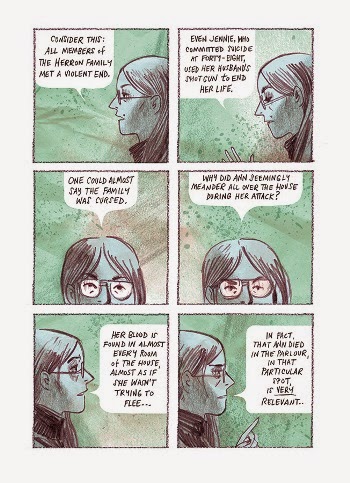 Elkin: That's the thing right there, Sheehan, the “most of our world” bit that you just mentioned.

Ultimately horror is horrific when it hits closet to home. When you see your own fears foisted in your face you're quickest to glisten with sweat. As Carroll tells us, “the lion has to come to someone's house” and if you hear padding across the floor in the next room, what's to keep you from screaming?

Still, the more I think about this book, the more I am able to distance myself from my initial visceral reaction and look at it more as a puzzle composed of some very intricate pieces. In this book, Carroll manipulates conventional narrative with a surgeon's scalpel cutting through cause and effect, bouncing her reader through time and space, disconcerting as she disconnects, adding a layer of displacement to the tone of its entirety. Then there's her apt choices of art style and color use, each of which adds another emotional hue. As well, she varies the thickness of her inking to contract and expand, and her lettering changes to resonate with the mood she is working with. In Ann by the Bed, Carroll uses all the evocative tools that comics offer in order to concentrate the tenor and the feel of the reading experience.

Her mastery of all the skills necessary to pull this off, in a way, pushes the craftsmanship at work to the background, allowing the reading to be immersive, the emotions taut, and the creepiness to be all that more creepy. And it takes both artist and artisan to take all the intricate pieces and connect them in such a dynamic way. Taking apart this puzzle, I see what makes good horror, which then, conversely, allows me to see what makes bad horror so bad, or at least ineffectual.

Horror ain't simple like funny ain't easy. With Ann by the Bed, though, Emily Carroll makes it appear so.

And that's spooky and creepy and scary all by itself.

Sheehan: I too responded to the puzzle-like nature of the book. There is a great pleasure to be had in parsing the components of the pages and then fitting them together. There is also great horror. Last week, reading the book yet again, I felt appalled when I realized the true brutal implications of the marks discovered on the floor under Ann's body. This was not the chill of an odd noise heard in the dark.

I'm pretty sure the parts can be fitted in different ways for different readers and they all end up with a unique picture and that's because Carroll does not provide all of the pieces to her odd jigsaw. She chooses not to show us any of the most effecting moments and by this the reader must conjure them for themselves. Everyone has their own idea about what the game “Ann by the Bed” involves. Everyone has their own idea about Ann's last moments. In that respect I would disagree with you about the reader being disconnected or displaced from the book. I would say that Carroll provides room for the reader to be very involved and to make the book and its horrors very personal.

That choice, to withhold rather than show, is one of the things that make this book so different from Through the Woods. In that book Carroll did not avoid showing her monsters. It is a mark of how effective those stories are that they were so involving despite the fact everything was right up front. I jumped a little in my seat when I finished His face all red. I was sitting on a rush hour bus at the time.

The difference in technique is one of the things I most admire about Ann by the Bed, it feels like Carroll is changing up and challenging herself. There is even a feel of sly social critique in the piece, another aspect that distinguishes it from the previous work.

Hats off to Youth in Decline for commissioning and producing this wonderful comic. The monograph series that Ann by the Bed is part of is an excellent idea. Having a publisher provide a contained environment to experiment and create must feel like a blessing for the chosen creators. It's a format which allows for bold change or tentative development and that’s to be applauded.

I have already placed a pre-order for the next Frontier, by Jillian Tamaki, and I'll be keeping an eye out for what is coming out next from the imprint. 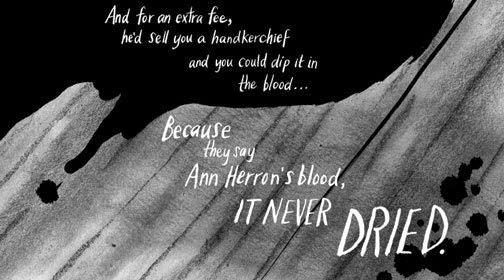 Elkin: Yeah, Youth in Decline's Frontier series has been a gem. While I, too, am eager to see what Jillian Tamaki will produce (as well as Anna Deflorian, Becca Tobin, and Michael DeForge for the rest of 2015), I would also highly recommend looking back and picking up copies of Frontier #5 by Sam Alden and Frontier #3 by Sascha Hommer.

As for Ann by the Bed, for me Emily Carroll's work lingers in its puzzle pieces, haunts in its entirety, and crawls into many of my dreams, shifting shapes into the things of nightmares.

“Because they say Ann Herron's blood, IT NEVER DRIED.”

Ann By The Bed was released through Youth In Decline as part of their Frontier series of comics.
Posted by DK at 14:21