Faction in the spotlight

"Faction 1 is what all anthologies should strive to be"

Faction comics continues to get some wonderful reviews! Check out what Panel Patter has to say about us here.

Lazarus by Rucka and Lark 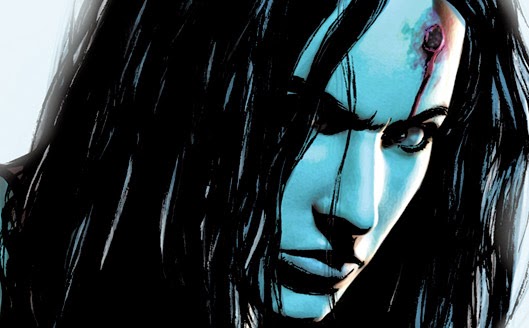 Sometimes it's hard to find the desire to write a review when nothing really grabs you enough to give a shit - for good or bad. Then virtually without comment, someone slaps a comic on your book pile, and the next thing you know you’ve been smacked full in the face with a bolt of pure awesomeness. You’re grabbed, wrenched and enthralled, and when it’s over you find yourself Googling the due date of the next one.

Greg Rucka has created just that with Lazarus. Set in a future not too distant from our own – with the rich getting richer and the poor reduced to “waste” - - the book imagines a chillingly believable world just a few National votes beyond today. Set in the late 21st century, the ruling structures of the world are divided into family dynasties, which rule over their domains and the people living within them, with naked, profit-driven ruthlessness. The tech and military is owned and controlled by the “haves”, whilst the “have-nots” exist in the crumbling third-world remains of our own present infrastructure.

Interestingly, Rucka gives a quick Family/Waste headcount in the beginning of each scene – providing not just context to the location, but also a deeper understanding that ‘The Family’ are few and ‘The Waste’ are many. And it is in the midst of this world that our lead character, Forever, is born. Well, actually - - made.

Forever is designed to be a genetically engineered weapon - and man, she is truly kickass - in the way that so many comic writers talk about, but rarely achieve. Artist Michael Lark has poured her into a tight black leather one-piece, with a sword that she brandishes with as much ease as her guns. Long, black flowing hair, flicked up into a ponytail, abs, biceps and a thickness that is refreshingly different to the skinny waifs I see everywhere else; I think I fell in love with her instantly. To Forever’s family – Family Carlyle, she is their human “sword and shield”, their protector and their Lazarus. Unlike the biblical version, diseased and deformed she is not. Though perhaps tellingly, it was the act of bringing Lazarus to life that started the enemies of Jesus plotting his downfall.

What is fascinating is how Rucka has shaped Forever - and in particular, the dichotomy between her toughness and innocence. Being grown and then trained as a weapon, Forever is largely ignorant of what her family really stand for and the vast sea of corruption that surrounds her. She shows obvious discomfort when asked to deal harshly with the lives of the workers and the unemployed “waste”, but remains fiercely loyal to the Carlyle clan. She yearns to be accepted by the family, especially her father, who coldly keeps those tensions stoked high.

Loyalty and Betrayal, Hubris and Humility, Have and Have-Nots, Good and Bad - this is the black and white world that Rucka and Lark have created for Eve -  and it feels terrifyingly close to our own.

The first issue starts brutal and bloody with a standout action sequence that puts Lara Croft to shame. Soon we are introduced to the Carlyle Family, consisting of five siblings - two boys, two girls …and Forever (AKA Eve). We also meet the rotten black heart of the family - their father, Malcolm; a classic patriarch figure, who controls his children and empire through both subtle and overt threat, as much as he does through emotional manipulation. At times it feels like a sociological experiment gone slightly wrong, power wrought on children to see how messed up you can truly make them. And the Carlyle Family are everything we could’ve hoped for in this sense - jealous, greedy, corrupt and insanely paranoid, of each other as much as of the other rival families. But as clear as this corruption is, it remains hidden from our Eve - and it is this crawling sense of betrayal that sits firmly at the heart of this story, and is what shapes the beginning of Forever’s journey.

But it’s not all darkness - Lark and Rucka also catered to a ‘girlie’ thrill on my part as well. When Eve and a rival family’s-own genetically engineered Lazarus meet, I enjoyed seeing Eve’s vulnerability shine through. Very Capulets and Montagues of course, but…ah, young (genetically engineered) love! it’s a beautiful thing. And it didn’t hurt that this other Lazarus was equally spunky.

Lark’s artwork is a fantastic fit for this book, and is a real pleasure to behold. Inky, realistic and restrained at the same time, his line work shows off the world to full effect. But for me, it is Rucka’s storytelling that really stands out in Lazarus. The thoughtfully constructed future world and the political interplay of characters and environment is what ultimately seduced me. Rucka is a real auteur and I feel supremely confident in his ability to keep the pressure up even as he gradually tweaks back the curtains on his bleak vision of the future. His crafting of Eve gives the story tremendous momentum. And frankly, her character is the reason why this comic is just so very, very good. Rucka has imbibed her with so much depth, complexity and strength - finely balanced by an understandably child-like innocence - that it’s just impossible not to be sucked in.

With much of the story still to come, my prediction is that Rucka and Lark are going to take us on an amazing ride, and I cannot wait for Google to tell me when the next one is coming out.

Get the first trade here