My favourite comic in Faction #1 was Ralphi’s Ricky & Lyle.

Featuring a bogan boy and his best friend, an obnoxious anthropomorphic cat, the strip followed their slightly dubious adventures in search of quick money.

Not content with just being hilarious, Ricky & Lyle was also elegant, sharp and true.

Now, a couple of years later Ralphi has just released a Ricky & Lyle mini-comic. On par with the debut of the wayward pair, it possesses the same wry, understated confidence and comes in a very tidy package - as part of French publisher Radio as Paper’s Rapmc series.

Under a lovely two-colour wrap-around cover is a sixteen page story that is over all too soon, but compensates by providing an abundance of details that somehow never crowd the panel and rewards multiple reads.

At the heart of Ricky & Lyle is a keen sense of liking and compassion for the characters despite a manifest of shortcomings that should make them completely unsympathetic.

All this is portrayed with an an art style so deft and fluid that it seems as much handwriting as cartooning. To say Ralphi's comics are assured is a huge understatement and it beggars belief that she has only comparatively recently turned her talents to crafting comics.

These strips are excellent. Whatever you do, find yourself some Ralphi comics now. You won't be disappointed.

I think that if I was going to get a tattoo, I'd ask the artist of Mesmo Delivery, Rafael Grampá, to design it. This comic just oozed style, a style that screams "ginger haired hipster with beard, braces and black rimmed glasses, playing the saxophone ...and drinking an espresso".

The art was key to Mesmo Delivery truly delivering. It's somber enough to give the impression of darkness, grainy enough to give it grit and bold enough to... well, to tattoo into my skin.

To top it off, the entire piece felt filtered -drained of colour, but without being overly muted, which gave it a real noir trucker look.

The world of Mesmo Delivery was equally gritty and intense. I have seen enough hitchhiker movies to know that truck-stops, diners and roadside hangouts usually result in a beheading or zombie attack. And Mesmo Delivery did not disappoint on the violence dial. This comic is graphic.

The characters were the most beautifully-ugly band of dysfunctional misfits I've seen in a long while. First up is Rufo, an oversized lug, with a squashed, pug like face, and gigantic, baby-like quality. And our hero (if that's the word for it), Sangrecco? Grampa describes his creative evolution (in a generous gallery at the back of the book) as a blending of Elvis and Iggy Pop; a character who brings performance art to assassination. Which is true. This character, for all his ugliness, is like ballet dancer with blades. And the supporting  characters; a band of toothless bottom feeders, made me cringe as much as smile - with g-strings over jeans, overbites, overalls and over-the-top inbreeding up to the wazoo.

I think what I enjoyed most about it though was it's zany, self-aware, and lovingly crafted cinematic framing. There were some panels, some scenes which just left my mouth hanging open they were so frickin' cool! Point-of-view conversations, beheadings (where zoom-in close-ups show the minutiae of the blade tearing through a throat), impalings, and my favourite panel - where a moment of piss-your-pants terror has been executed with unimaginable (for the subject matter) design panache. It's something else.

The story itself (also authored by Grampá) was simple, following a couple of mysterious truckers pulling into a diner. I won't go into the details, but it worked perfectly with the intense graphical quality of the art. I suspect my Faction co-publisher would disagree with me, but not all storylines have to give you sucker-punch depth. In fact the simple story telling of Mesmo complemented the visual complexity of the comic's design -  and I found the balance pleasing.

It definitely makes me want to see more, but not in the sense that I fell in love with the characters, or wished the story would never end. In fact, in love with Mesmo Delivery I definately am not. There was certainly nothing to like in the characters, and the violence was harrowing. But as a spectacle, it was riveting. It was such an adrenaline-pounding read that, like a drug trip, I felt hollowed out after it was all over. And like a drug, it left me wanting more.

And a tattoo. It left me wanting a tattoo by Grampá. So yeah. Go buy this book.

Get it here
Preview it here

Amie Maxwell
Faction co-editor
Posted by DK at 22:14 No comments: 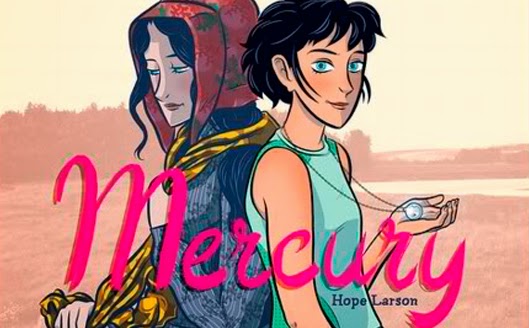 So Hope Larson is a big deal in comics. She won an Eisner Award in 2007 for "Special Recognition" of her talents - and her recent book, A Wrinkle In Time has garnered widespread acclaim. She’s a real comic success story in fact, so it’s a little embarrassing that I haven’t read anything of hers up until now. Consequently it was with some enthusiasm that I plunged into one of her recent(ish) graphic novels, Mercury (2010).

Right off the bat, Mercury is easy to read, easy on the eyes, and launched its story in a familiar, if well-worn groove. You know the thing: Boy meets girl, girl likes boy, cute smiles exchanged, teen relationship angst ensues. Her characters are familiar too. Boldly drawn, their faces are attractive and seemingly innocent and ordinary. Ordinary but likeable. And that's a mean feat when most of them are teenagers!

Young love, It's cute right? The comic reminds us that crushes are a staple human condition, the narrative emphasizing this by following the lives of two young girls living 150 years apart. The two stories run parallel to each other throughout the book; both set in the same area of Nova Scotia and following an apparently familiar trope. Until it doesn’t, and the familiar falls away and things start getting a little …freaky.

The story pivots on the discovery of magical necklaces that can be used to track down the things that you desire the most, and before long there is the added lure of riches and gold; advances are spurned, and events take a decidedly supernatural turn. From here the story advances at a brisk pace, successfully generating a healthy forward momentum of tension and anticipation. It’s a solid, assured read.

But by the end, when I closed the covers, I had to admit to myself that somewhere along the way, it had just fallen flat. Now, this may be a personal thing, in that perhaps I simply expected more from it - a more thorough plumbing of the depths, if you will, or perhaps just getting a little more gristle to chew on, and I freely admit that perhaps this was never the author’s intention in the first place. Never the less; in this respect, the book left me wanting.

Of course, this is a book about young people getting crushes and coming of age, and it certainly took me back to that time with practiced ease, but story-wise; that was pretty much all it did. There were no fresh insights, no meaty undercurrent, and perhaps not quite enough of a story to keep me interested. I know I’m not the target audience for this - it very much falls in the young readers section of the library. But I enjoyed the Twilight books, and I just finished reading Luke Pearson’s wonderful Hildafolk series, which are definitely aimed at young readers - and I enjoyed the hell out of them, so I don’t think that should necessarily be a issue.

On the other hand, in a final indecisive vacillation, there’s certainly a market for this kind of material, and I guess I have to concede that it’s just not me. Larson is undeniably talented, and I would love for her to tackle some material with a bit more depth (and perhaps she has done - I certainly need to read more of her work before I made any ill-judged generalisations), but equally it may be she has found a niche for her work that suits her -and her audience- very well; and for that I applaud her.

Get it here
Or, like I did, at the local library - yay libraries!

Amie Maxwell
Faction co-editor
Posted by DK at 03:56 No comments: