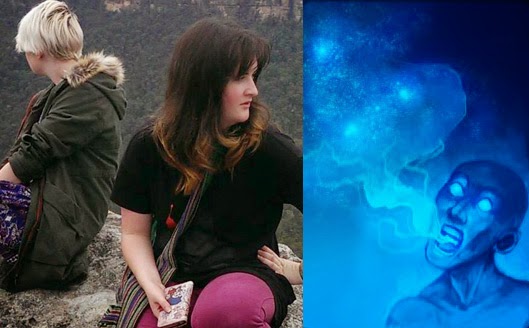 NOTHING FITS was one of my favourite discoveries of last year. Starting life as an webcomic it made the transition to print with the help of a successful Kickstarter campaign. Combining hover cars, shirty, aggressive young woman, clones, mummies, Egyptian gods and talking rats it blew you along its slipstream, delivering with all the appeal and wit of a cheeky punk single - think Buzzcocks or The Undertones. Finishing the volume you were left wondering what would come next from it's two creators Mary Tamblyn and Alex McCrone.

For writer Mary the answer is Rosetta Phone, a new webcomic she has developed in close association with her good friend Bethany Hughston. Drawn in a bright, attractive, fine line style it combines a humorous time travel narrative with a creepy cosmic undercurrent. Rolling out at the rate of a new page every Wednesday morning it marks a highlight in my working week, normally in the bleary early morning as I'm rolling to work in the cozy confines of Auckland public transport.

Mary and Bethany were good enough to agree to take part in what turned out to be a lengthy interview with Factional. Here is part one of three.

Factional: What are your respective origin stories? And what lead you both to comics?

Bethany Hughston: I don't really know how to describe it honestly, it wasn't really some cool lightbulb moment. I got into art and drawing at a young age because my mum was an artist and my older sister and brother were both creative as well, my sister as an artist and my brother as a writer and musician, and our parents were very supportive. I also went to schools that had a leaning towards the arts and stuff.

I got into comics really early! My brother was a huge comic lover, especially of Tintin, and when he outgrew his massive collection of Tintin comics, I got them. And I read them cover to cover and really got into telling stories visually, and by the time I was in school maybe at 15 or 16 I discovered webcomics and read heaps! I started drawing and doodling my own stuff, like just comics about my friends and things and then eventually into full on webcomics when I was 16-18 and I've been doing them ever since.

Mary Tamblyn:  I never liked art when I was younger, I was obsessed with Ancient Egypt and I wanted to be an archeologist or forensic detective. I didn't actually start drawing till about Year 4 or 5, when I met Alex Jones (AJ), who was mad into comics and making his own little comics about his characters. He'd put them on the class book shelves and everyone would read them during silent reading. I started to draw, mostly animals, which then led to making Rayman fan-comics with my cousin. We did these for a couple of years, they were... very unique. They soon stopped being about Rayman and more about our own characters we made along the way.

We had compulsory art at Intermediate and High School, and I had really good teachers for that - while I had really bad teachers for science. This made me way more invested in drawing and creating. I wanted to be an animator. I continued making short comics, with the characters that then went on to become a part of Nothing Fits. I was never that into comics, I was more into novels: staying up into the small hours reading most nights at Intermediate and High School. I'm still... regrettably, not very good at reading comics. Art School makes you hate everyone and everything and really apathetic at actually reading anything. I'm getting better at it though. So I only really got into comics because of AJ and only continued with them because of Alex McCrone's interest in them. Finding ComicFury as a webcomic host got me more into comics, and meant I met a bunch of really cool comicy people.

Fac: Webcomics seems the most natural step for young cartoonists to take now days, I presume that is where you guys met.

Bethany: Yeah both me and Mary met through webcomics and through Comicfury.com, I'd already been on there for a while and I had established a name for myself with two comics I wrote in high school which had become really popular on the site. Mary and Alex came onto the scene in 2012 I think, and I remember seeing Nothing Fits and really liking it and telling some friends of mine to go read it. We started just generally chatting on the forums and the then website exclusive chat which was just a bunch of artists and writers talking to each other about nothing, and then we got each other's Facebook. We were only talking about this the other night trying to remember how we even started talking to each other but it was something along the lines of a mutual friend of ours wanted to talk to me more but was nervous so Mary volunteered to show support. Eventually we realised we got on really well and exchanged Skype info, and since then we talk and webcam frequently, we've met up and traveled a bit. And we plan to do much more of it!

Mary:  I must admit that coming to ComicFury I did feel very threatened by Bethany, just because she was very well known and popular, and yes, I was very jealous of this. It's embarrassing to say this, but I initially hated her. However, as she said, once we got talking one on one, we became close fast. I love her intense and in depth world's she has created and her utter dedication over the years to stick with them. She is a better writer and artist than I am, comics wise, and a very good friend.

Fac: What do you think is the most important thing about entering that world?

Mary: Webcomics are the quickest and easiest way to get your work out there, and getting almost instantaneous feedback is very rewarding. Also means you aren't stuck in a void of creating without any viewer feedback for the process of creating the work - which can take years.

Bethany: I don't know, really, it's hard to say. A positive and safe community is really important when starting out, and he web provides near instant feedback for your work, which is really important for growth. ComicFury was great because it was just a bunch of normal people who happened to write or draw comics, and everyone was willing to give people a chance! There wasn't any nastiness or mean spiritedness and everyone was always willing to help and listen to others. That was really important to me starting out, because I was so scared that people would hate me or hate my stuff and I would be hounded for no reason. So having a positive environment to post on was great!

Mary: Also, a  good, clean and easy to use website layout is key. It doesn't have to be fancy, but it needs to be functional. ComicFury has a number of default layouts that work well, which is a bonus for people who are new to webcomics. They also have a bunch of great people willing to help improve/fix layouts if you need help (which is actually how I met my boyfriend, ha ha, he made the Nothing Fits website for me... actually him and Bethany worked on making the Rosetta Phone one too).

Fac: Do you think it is a nurturing environment? When I wrote my review for Nothing Fits I went and looked at the ComicsFury site and was amazed by the community that seemed to grow around the comic, it seemed like a really healthy environment to produce work in.

Mary: ComicFury was really welcoming, apart from my initial stupidity and jealousy, but at times it can be toxic. Most of my toxic interactions weren't surrounding my comics themselves though, but happened on the forums, mostly during political/social issue discussions. Which are heated topics in any art community.    The most important part about coming into these communities is knowing the difference between subjective and objective feedback. A lot of critiques thrown online don't come from people considering things objectively, rather just their personal opinions (and often come from people with hardly any more experience than you have yourself). It's also important, as it is a way of getting direct feedback from viewers - to listen if you do something wrong (unintentionally being racist or sexist for example), this platform allows you to amend and fix things, because its not printed, and its not set in stone, you can make up for your mistakes. Webcomics are a great place to experiment and evolve your art making and story telling skills, and quite often you can see a clear difference from when you started your comic, to where you are now (vast improvements usually). Really, it's just a great way to get your idea out there right now without having to stall, and redo your comic forever as your skills get better, you can just grow with the story.

Bethany: I don't know, really, it's hard to say. A positive and safe community is really important when starting out, and the web provides near instant feedback for your work, which is really important for growth. ComicFury was great because it was just a bunch of normal people who happened to write or draw comics, and everyone was willing to give people a chance! There wasn't any nastiness or mean spiritedness and everyone was always willing to help and listen to others. That was really important to me starting out, because I was so scared that people would hate me or hate my stuff and I would be hounded for no reason. So having a positive environment to post on was great!

I also think it's really important to speak with artists and writers of all different ages and backgrounds and just be around them and see how they all work, just to figure out where you stand and what you like and what you can learn from them. That's why being on the forums and hanging around and participating was so beneficial for me, I got to learn so many things and I got to share my own ideas and knowledge without worrying about being attacked or made fun of.

Follow the progress of Rosetta Phone here
Posted by DK at 15:54